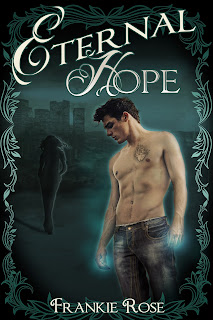 When your friends go missing and you don’t know if they’re dead or alive; when you tie your soul to the one you love; when you kill to protect and your family suffers, there’s only one thing you can do:

Farley Hope is special. She was prophesied to kill the forebears of her bloodline- a race of cold-blooded Reavers, men who steal the souls of the living to gain power. The Quorum had counted on Farley ending her own life in the process, but when Kayden came to her aid and helped save both her and Daniel, he undid their plans. Now the Quorum are displeased, not only with Kayden, but with Farley and Daniel too. Though her father is now dead, Farley’s troubles with the Reavers are far from over. An ancient Immortal, trapped for a thousand years, wants Farley for himself, and he will stop at nothing to claim her.

With secrets that lead to anger and pain, that turn friendship to dust, the group must overcome the problems within their own circle before they have a hope of fighting off the powers that threaten their lives.

How much do I love Frankie Rose and her Hope series?!? I just finished reading book 2 and it was just as awesome as the first!

The number one thing that I really like about Frankie’s writing is the simplicity and to-the-point-ness of it. Some of the indie authors I read put too much in the story, whether it’s too many words or scenes that seem irrelevant. Frankie doesn’t do that at all. Every scene, every dialogue, even every steamy moment, has a purpose within the grand scheme of things. And that just adds to the experience of reading the book; knowing that everything matters.

I think I liked the plot of this book more than the first. There’s an established relationship, not without its problems; they travel around the country a bit; there are new characters, both good and bad; and the storyline is exciting and full of suspense. There were a lot of things that surprised me, too. There’s nothing not to like!

I found that Daniel was the character that changed the most from the first book to this one. He was emotionally reserved and hard-headed throughout the first book. In Eternal Hope we got to see a softer, more romantic, side of Daniel. He still had moments of emotional withdrawal and other moments where he really kicked some ass, but overall he seemed to have many more sides than before.

I feel like this review is very vague, but there are so many things that happen and I don’t want to give anything away. I just want you to read it! And I just want to read the next book in the series. Frankie! When does Lost Hope come out?!?

Thanks to Frankie for the ebook review copy!

I'm also participating in the Scavenger Hunt for Eternal Hope! What you've got to do as a participant is visit all the other blogs and collect the words in GREEN. Once you've done that you can use them to complete the passage below, which was written solely for the purpose of the Blog Tour & Scavenger Hunt! (Hint: you can find my word in my review!)

On the last stop of the tour, there will be a form for you to submit your finished excerpt, and enter for a chance to win awesome prizes. There will be 5 winners of various prizes, available internationally!

For all the information about the scavenger hunt, including the full schedule, go here.

Also, don't forgot to visit the other two stops on the tour today. They'll each have a different word for you! Lori @ Lori's Book Blog and Bianca @ Bianca2b


Excerpt
Farley felt her face redden, which was _________ inappropriate. Daniel and Kayden were _______ she was watching, and for once their sparring lacked the flashy showmanship they usually employed to _______ her. For the two of them, nothing _______ beyond the dimly lit parameters of the hangar. Beyond the lunge, beyond the parry, beyond the block.

This was how it would really go down, if they ever meant to do serious harm to one _______. Movements fluid and graceful, there was _________ primal about their circling. Quick _______ of calculating eyes, green and blue, preempting the other’s next move. Kayden’s hair was darkened with sweat, but both their chests rose and fell with __________ regularity. In and out. Slow and steady. The stern, focused expressions on their faces said ____ were in total control.

Farley let the darkness wash over her and kept her presence hidden. The confrontation was too ___________ to interrupt. Bare chests, muscled and tanned; silver flashes of metal as their blades sang through the air. Even Cliff would have been impressed. Farley bit her ______ lip as Kayden darted _______ in a sure leap, thrusting out with deadly precision towards Daniel’s throat.

Farley’s heart leapt to her throat. Those eyes, piercing and sharp, fixed on her _______. She swallowed and braced against the wall behind her, trying to camouflage with the _______. Kayden shifted forward, ready to take _________ of Daniel’s distracted position, but the dark-haired boy simply lifted his hand. A wordless gesture:

Robotically, Daniel rose, his _____ suddenly vanished, and dropped the knife into the dirt. Kayden’s apparent confusion only lasted a second; the moment he ________ it - that she was there - was _______. One second he was ________ Daniel’s creased brow, the next he had spun around impossibly quickly and was staring, too. Blue and Green. Farley felt her throat closing up. She opened her mouth to speak, but nothing came out.

As a child, I was always accused of being bookish because I wore glasses- big, horrible, ugly ones with too-thick lenses. Those kids, the super smart ones who always know which tender insecurities to poke at in order to provoke

life-long complexes, used to accuse me of reading too many books and that my eyes were going to rot out of my head (their words, not mine!)

The truth of the matter was a little more embarrassing: I used to sit too close to the T.V. That was the reason why I had to wear glasses, but kids don’t really care about small, insignificant details like the truth, and so I was labelled a nerd. The label kinda stuck, and after some sage advice from my awesome nana (nana, you rock!) I decided that if I was going to be abused for my supposed literary obsession, I might as well develop one.

I guess that’s how I got into books and reading at an early age. Since then, I’ve been ripping through books like they’re going out of fashion, which, thankfully, they’re not. Good thing, too, because I’m a writer now, and books are my business!

Thank you to everyone who has supported and encouraged me on my journey- look for your names in the acknowledgements! And a big thank you to you, the reader. I hope you’ve fallen in love with Farley and Daniel just like I have, and that you’ll join them in the next book, Eternal Hope!