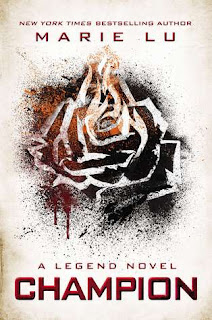 
Synopsis:
He is a Legend.
She is a Prodigy.
Who will be Champion?

June and Day have sacrificed so much for the people of the Republic—and each other—and now their country is on the brink of a new existence. June is back in the good graces of the Republic, working within the government’s elite circles as Princeps-Elect, while Day has been assigned a high-level military position.

But neither could have predicted the circumstances that will reunite them: just when a peace treaty is imminent, a plague outbreak causes panic in the Colonies, and war threatens the Republic’s border cities. This new strain of plague is deadlier than ever, and June is the only one who knows the key to her country’s defense. But saving the lives of thousands will mean asking the one she loves to give up everything.

I’m sad I didn’t enjoy this book as much as the previous two. I just found it slow and felt like there wasn’t a whole lot happening, until the climax of the story. That being said, I absolutely loved the way it ended (which I won’t share because, spoilers!).

Much of the story focused on Day, and the health issues he was experiencing due to the Republic experimenting on him when he was younger. I understand that one of the biggest driving factors of the story is that Day is losing who he is (his strength, his stealth) because of his tumor, but I didn’t enjoy reading about him because he wasn’t the Day that I came to love in the last two books. I guess it was kind of the point, but he just changed too much for me.

Like I said, the story seemed a bit slow, and definitely more political. Instead of running and scheming and fighting, there was a lot of discussing and thinking and planning. Not that there wasn’t any action, there was, it was just less than I was hoping for or expecting.

What I did love in this story was that Eden was in it and we got to know him as a character, through Day’s eyes as well. He is so different from the Eden that Day once knew because he’s been through a lot and he is older and more capable of understanding what’s happening in the world around him. He’s not just Day’s little brother anymore.

As I mentioned, I also loved the ending, but I won’t share any details on that. But it was a great way to end the series. Although Champion fell a bit flat for me, I still love Marie’s writing and I can’t wait to read her new book Warcross.